Fist of  all I would like to say, sorry. I haven’t posted much recently, real life has been hectic and I haven’t had a lot of time for the fun stuff on the MHR. I should be back  in heavy rotation in 2 weeks, so…. prepare thine selves.

Now lets define some terms before people get mad, I don’t consider cooking shows or home improvement shows or even survival shows (i.e. Man vs Wild, Survivor Man) reality TV. That’s more like “how too” TV.

*By game shows I mean Jeopardy, Wheel of Fortune, even Fear Factor. NOT FUCKING SURVIVOR.

I don’t even consider “working shows” like Deadliest Catch, COPS or Dirty Jobs reality TV. They are borderline in that they try and instill more drama into a situation then is necessary sometime, (OMG NO CRABS!) but they are more documentary in nature, and the people involved are doing things that have some purpose. If the show wasn’t there, they would still have a living.

The shows I hate can best be summed up into 2 areas:

1. “Talent” TV. American Idol, Dancing with the stars, Americas got Talent. America has no self respect…….

2. “Follow them TV”. Anything that just follows some asshole around see what its like to “see life through their eyes”

Those are the fucking shows I hate and I hate the people that watch them. I hate you if you are watching them ironically to fucking hate on them. Your are inadvertently supporting an awful fucking thing and may ye burn in the fires of hell for all eternity for it.

I’m not gonna get to deep into the soulless well that is talent TV, but I’ll leave you with this:

If you own an American Idol CD or have been to an American Idol concert, please throw yourself off a fucking bridge. You will not be missed. You voted for Hubert Humphrey and you killed Jesus.

Now that we have that out of the way, on to the follow me TV stars…

Paris Hilton , Kim Kardashian (hell any Kardashian i.e. Mongo or the other one), that skinny bitch who was adopted by Lionel Richie (I always confuse him with Little Richard). We only know about these people because they are rich and for some god damned reason the camera is following them around. 2/3 of the aforementioned whore have sex tapes readily available on the internet, yet they are still accepted in the public eye.

Not that I am against sex tapes, I’m quite pro sex tape (hot ladies feel free to send all sex tape submissions to admin@moleholeradio.com ;)) (no dick pics) (well, send them to eltopoxl@gmail.com)(the dick pics). However the best president we have had in recent history gets a blow job and we want to impeach him. If he had taped the blow job would we have been more forgiving? Would he have gotten his own show?

Along with these rich skanks are the whores of a TV series known as the “Real Housewives” of any cunt ridden city in America. The best I can figure it, these shows follow some gold diggers around and watch them squabble.  Then new ones get into the mix, and they bitch, and they they do brunch. Its like if you dolled up a hen house with LV bags and had dollar rail drinks….. as I type that I am suddenly interested.

Now I have never watch the show, but being someone of average intelligence I bet I can lay down an episode for you.

Bethany and Candice go to lunch, promptly order a peachtini and a chocotini.

They talk about how Miranda’s new tits make her look like a skank and therefore how much they hate Miranda.

Becky shows up, orders a melontini and all three fuck holes for money bitch about Miranda.

Miranda shows up (BECAUSE THESE TWO FACED PAY TO SUCK MACHINES INVITED HER) orders an appletini, everyone laughs at a delightful anecdote Miranda tells about her illegal immigrant slave .. I mean servant…  who didn’t know the difference between a salad fork and a shrimp fork.

After a solid lunch of 3 leaves of lettuce and an olive, they all go to the bathroom, throw up and then go spend their husband’s money.

That’s the whole show, and you eat this shit up America with a fucking shovel spoon ……

Sorry I kinda blacked out there contemplating how great a shovel spoon would be…. where was I , oh yeah , fuck them and fuck you.

As much as I can’t stand those “rich bitch look at me” shows, there is one show I hold in the highest fucking contempt.

Jon and Kate plus 8, or Kate plus 8, or my Vagina is a clown car, or… whatever they call that show now. They gave her a show solely because her hatchet wound was able to spawn 8 fucking mistakes (6 at once) and for some reason we should care about it. Her and her brood contribute nothing to society except more carbon emissions.  We don’t even get a decent plot line! Thats the cold hard truth. She is famous because the crack between her pasty thighs is more efficient at cranking out asian product then a Hyundai plant. 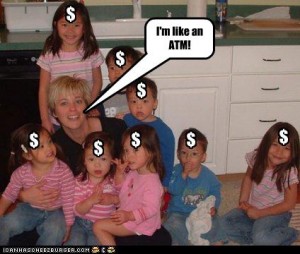 All I have ever seen is clips of that show and all she fucking does it bitch and neglect her kids. And then she wonders why Jon would cheat on her? If I was blessed with 6 kids at once (on top of 2 earlier), my celebration would involve a weekend in Vegas doing enough coke too kill Lithuania and culminate in me throwing myself off the Hoover Dam. Happy Birthday kids! Use my life insurance to get 1/8th of a pony!

Now, I won’t get into the politics of having 8 kids in a world of over population and shortages, because in all honesty if you can take care of all of your kids, fine, more power to you. But you have 8 kids and then you essentially neglect them on TV for your own fame and fortune you become  new level of bitch. Like ultimobitchosuaruscunt.

I do hold out a little hope in the fact that she loves to whore out her kids so much that maybe, while clutching onto the 14th minute and 25th second of her fame, will agree to something awful. I would pitch “Win Mommy’s Love” where all 8 kids compete in gladiator style combat, old school with tigers and Proximo and shit. Whoever lives till the end finally gets to be mommy’s favorite and she MIGHT learn your name.

Unfortunately, instead of Gossling Battle Royale,  this reverse mullet wearing baby factory is on “Dancing with the Stars”. I guess she counts as a “star”? This show gets the biggest group of B-listers and now Kate and her new hair extensions join the crowd. I watched a video on CN mother fucking N that interviewed her about this show and shes talking about how great this is for her and her kids? Oh really well where the fuck are they? I saw another video that showed her yelling at her instructor ( a man who apparently has been a professional dance on this show since its inception)(not that I give a fuck) tell him that he doesn’t know how to “teach her properly”. Too bad the show isn’t about laying on your back and getting repeatedly inseminated because then she might have a small advantage, however this show is about dancing. Maybe blasting out a litter of children broke her hips and therefore she can’t dance no mo’ (as they say on the streetz). The best part is she gets into People magazine defending herself from the shitty mommy criticism, that this is how she can provide for them.  I call bullshit, this is all about her, always has been. I hope the state takes her kids away and feeds them to the poor. Modest Proposal! Jonathan Swift Mothafuckas!

That all being said, I can’t wait until she hits rock bottom and does Playboy.

I bet it looks like a collapsed pup test.