In honor of Mr. Steven Segal making the first of what will hopefully be many appearances, I thought I should bring this gem to the collective attention: 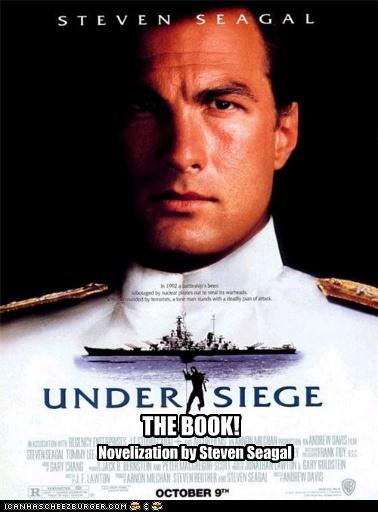 Here are a couple of tastes, like when we are introduced to Jordan Tate:

The play cake is bumped across the room, immediately it lights up and plays music, but Casey Ryback isn’t startled. He’s awesome. He’s like nature.

A young women pops out of the cake in a navy uniform. She looks awesome and her tits are rockin. She is totally hot and looking wet and down to get it. Casey is awesome and says “Who are you and what are you doing here?”

Casey, just like the wind, moves across the deck and grabs a can of gas. He gets to the copter and swiss cheeses the gas can with his knife, awesomely, and pours gas all over the wing of the copter. Using his super intellect and good looks Casey creates an awesome trap by propping the gas can up against a pulled grenade. He then calls the terrorists attention by riffing ridiculous on a Navy issue Fender Strat. Diggada Wow!

The terrorists scream “Fuck that’s awesome” and start shooting. The bullets dislodge the grenade trap and Casey soars like an eagle over the side of the boat as the copter blows to pieces.

Or finally, the knife fight with Stranix at the movies climax.

Casey whips out his knife and starts getting it done, but Stranix has mad skills too. They totally whip ’em around for like 5 minutes and everyone thinks its awesome. Casey gets cut up, but he doesn’t care, he’s like the wind. He is nature. Stranix doesn’t have a chance. Every deep cut on Stranix results in him screaming “Shit you’re awesome!”. Casey doesn’t care. He knows. Everyone knows. He is Casey fuckin Ryback. He gets shit done and bangs on the babes.

With one last triumphant roar he jams Stranix face through a TV.

How this dodged a Pulitzer is beyond me.

*In retrospect this totally rips off Real Ultimate Power, but fuck it. I already typed it up and I’m pretty sure Steven Seagal wrote that book too.