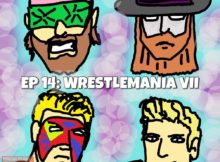 Welcome back to Hulkamania is Dead! The most original wrestling podcast

where the hosting squad has re-booked the WWF from 1984 -WITHOUT Hulk Hogan!

This week Coby Nida and Jimmy Price time travel to 1991 and fantasy book the
enitre WrestleMania 7 card – what happens when The Undertaker turn the Macho King into a mad man? Who will prevail in the

battle between the hart foundation and the rockers? And finally find out who is THE MAN at the end of the epic between Ric Flair and Sting!