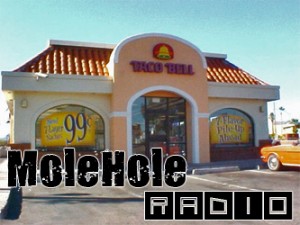 Vinny and TJ devour several pounds of Taco bell in an effort to secure their manhood in the first ever MoleHole Radio Taco Bell Challenge. Goggs hates everything, especially young children who climb mountains. Iron Man 2 pre-release ticket for giveaway!